So on Monday July 9, I got to experience my first big Hindu celebration, Palhki. Palhki is a huge pilgrimage that happens every year. It starts in Alandi, which is just up the road from Sangam, and goes to a little tiny town that is 300km away (that is about 187 miles). Over 200,000 people gather every year and walk this distance. So in order to take this whole experience in, us PAs took the day off and decided to go out and sit on the wall and people watch. So we gathered our coffee, cereal, blanket, umbrellas, and of course our cameras and set out for a day of Palhki. 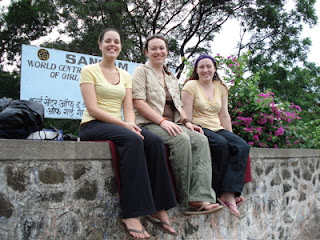 We watched people all morning and of course, since we were a bunch of white girls sitting on a wall watching people, people were watching us. The Palhki, which is a carriage that carries the gods and goddesses, is carried along the way. It makes stops along the way at different temples. The first stop is at Datta Temple which is just right outside Sangam's door. Aruna, who is the House Manager, decided that she would take us to see when they bring the Palhki into the Temple. There were tons of people waiting in line to touch the Palhki but since we were a bunch of foreigners, we got to go right inside and sit right in front of where they were going to bring in the Palhki. When the Palhki arrived, it was pure chaos. One of the girls recorded them bringing it into the temple on her camera so hopefully I can post that. I can't even describe how crazy it was when they brought the Palhki in, it was pure madness. After we got to touch the Palhki for good luck during the next year, we headed back to Sangam to go back to work. This place always amazes me, that is for sure. 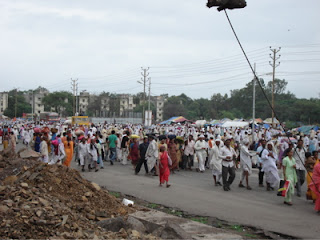 ps: The day after Palhki occurred, our night watchmen Mangesh, came back at lunch time to show us the newspaper. We were in it!!!!! There were a lot of people that were taking pictures of us but I think that the one guy that asked if he could take our picture must have been with the newspaper. I'm even above the fold!!!!! Ironically, a few weeks ago, we had to set goals for work. I decided that I wanted to be in the newspaper. So I believe that I achieved that goal in record time!!! 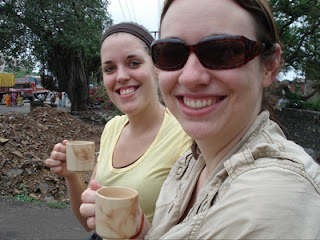 Julie and I enjoying our chai on the wall!
Posted by Christa Ochocki at 1:25 PM 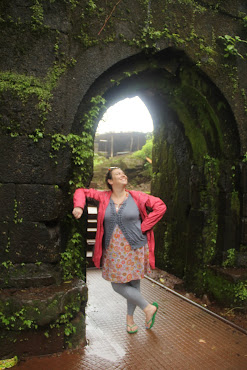